Table of Contents show
Cloud storage for consumers and small businesses (i.e. not enterprise) has “traditionally” been associated with the concept of syncing a dedicated local folder with the cloud, because it’s the way desktop apps from DropBox, Google Drive, OneDrive and the likes work. You pretty much have to adapt your file organization to their way of thinking and use their client. [Edit: this is changing, as you’ll see at the bottom of this entry.]
1. Placeholder files/links for hybrid storage
2. Unlimited Cloud Storage?
3. Finding the Right End-to-End Solution
3.1. Automated Backups
3.2. Cloud Mount Alternatives
3.3. Cloud to Cloud Backup
3.4. Self Cloud
3.5. Cloud Media Server

Cloud storage for consumers and small businesses (i.e. not enterprise) has “traditionally” been associated with the concept of syncing a dedicated local folder with the cloud, because it’s the way desktop apps from DropBox, Google Drive, OneDrive and the likes work. You pretty much have to adapt your file organization to their way of thinking and use their client. [Edit: this is changing, as you’ll see at the bottom of this entry.]

But what if you want to back up existing folders or network drives? Then you have “cold storage” solutions such as CrashPlan or BackBlaze, but they have their own hard-set constraints and perspective on how things should work that you have to adhere to.

And what if you want to extend your storage into the cloud, to store stuff that you are not going to keep around locally? That’s just how sync works by definition, while the backup-oriented services will eventually (some earlier than others) drop the files that they no longer see on your local system. This is a data retention policy and business model choice from the likes of Backblaze, not a technical limitation.

Wouldn’t it be nice to have more flexibility and use the cloud as if it was just another drive? That’s what we’re going to explore in this entry.

However neither of them is affordable enough to back up terabytes indefinitely (well apparently GDrive can be, but not officially), so they don’t meet all my needs.

On the other hand I’ve grown frustrated with CrashPlan’s increasing memory and CPU use as the size of my backups have increased. Their java client also feels very stagnant.

So I’ve started looking into third-party apps that let you mount cloud storage as a network drive and/or back up to one or several cloud storage providers among those that offer the most terabytes for the buck.

After some back and forth, the big cloud storage vendors have all moved to implement placeholder files:

Google Drive. Google’s G Suite Business has a plan for $10/user/month with 1TB of storage, and in theory you need to have at least 5 users to get unlimited storage. However, in practice the limit on smaller account is not enforced, I and many other people have several TBs on single-user GSuite accounts. Of course this may change at any moment, but Google has closed their eyes on this for years.

Microsoft OneDrive. Microsoft discontinued unlimited storage in November 2015. I have 1TB with my O365 subscription for $12.5/mo, which I’d pay just for Office desktop apps anyway. $0.2/mo for each extra GB is prohibitive though.

Dropbox. To go beyond the 2TB max for personal plans (“As much space as needed” which I guess doesn’t quite mean unlimited), you need at least 3 Business users at $20/mo each, or $60/mo total.

Box. To go beyond 100GB into “unlimited”, you need 3 Business users at $17.3/mo, putting us again in the $50/mo ballpark. They called The End of the Storage Wars back in July 2014, yet one of their big competitors eventually blinked…

Amazon Cloud Drive (ACD). When it was introduced in 2016, the $60/y unlimited plan made it the most cost-effective competitor to CrashPlan or BackBlaze, but that was discontinued in June 2017. Some users took the unlimited part quite literally. The 1TB plan now costs $60/y

This stacks works really well with several TBs of data, for a very reasonable amount of money, as I spent $80 upfront then spend $22.5/mo.

I can be up and running from a new machine very quickly and have several layers of backup so even if there’s a major problem with one cloud vendor, I have effectively a mirror in another one, as well as local copies. 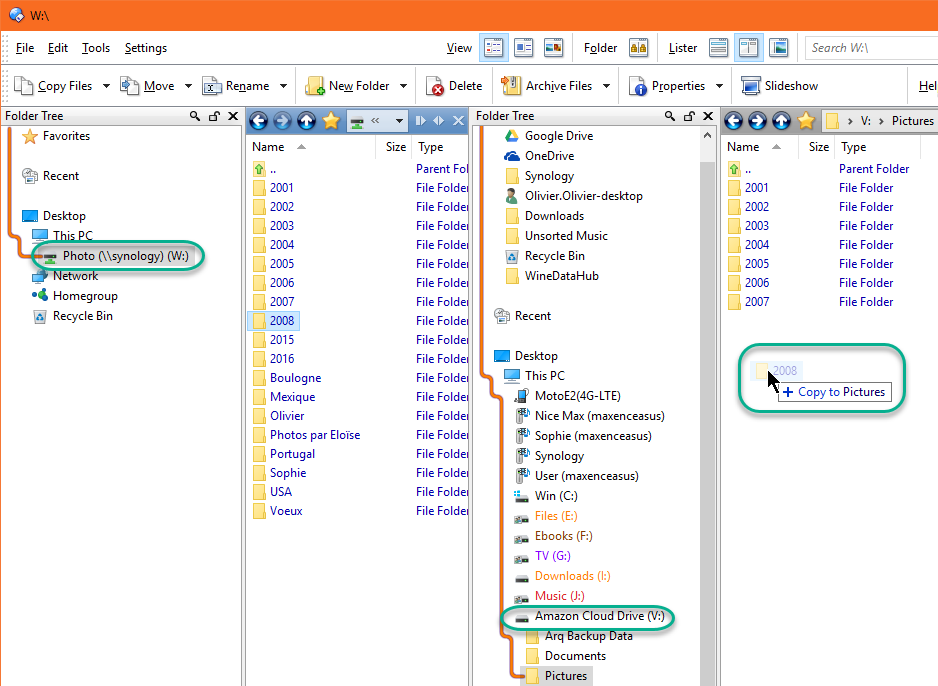 I’m using Glasswire to chart bandwidth usage by application. Some people suggest using a VPN to get better upload speeds to ACD, but my brief test was not conclusive to that effect.

There’s also Duplicati which some people like. I’d rather not have to deal with a CLI tool such as Rclone or acd_cli because of their lack of a GUI.

See also these threads on /r/DataHoarder:

One of several options

There’s a number of apps that more or less promise the same type of functionality, including:

(The links above mention ACD because at the time it offered unlimited storage.)

I’m not yet using any of this, but for future consideration:

I haven’t researched this much yet, but might later. Owncloud, already mentioned earlier, also plays in this space besides:

I haven’t tried the Gdrive + Stablebit + Plex combo yet, but that’s on my to-do list, I’ll update this post when I’ve tested it. For reference: