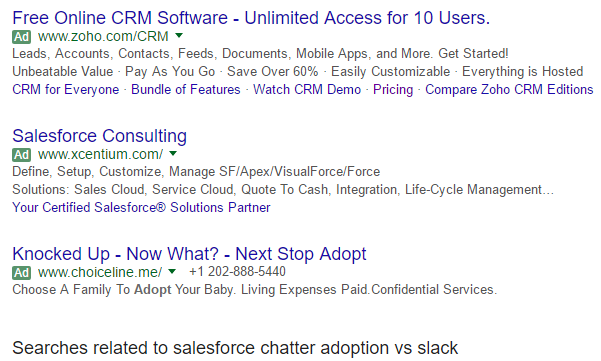 I just saw this ad while googling for Salesforce Chatter adoption vs. the increasingly ubiquitous Slack, and was stumped for a second before realizing what was going on, so I thought I’d share the chuckle. (This fleeting state of mind is called “lol wut” in internet lingo – I think I got this from when I played World of Warcraft.)

Google may be putting huge resources behind AI and machine learning (just this week: zoom, enhance!), but you can bet they won’t exert themselves any more than necessary to make their core AdWords business less wasteful for their clients. Granted, in this case it’s unlikely I’m going to click on that one ad that’s not like the others, but there’s so much garbage traffic and clicks in so many AdWords accounts, I’d love to know its value. Have you ever reviewed what’s in the Google Display Network if you don’t strictly restrict sites your ads will appear on? The horror.

I bet Google has a fairly good internal estimate about how much money is wasted on their ad platform, and it must be in the billions of dollars annually. And financially it would be dumb of Google to be too smart about it until and unless a Facebook or Amazon starts capturing active purchase research and intent nearly as effectively.

Back to Chatter vs. Slack, I didn’t find anything conclusive but I haven’t witnessed much Chatter uses in the Salesforce deployments I’ve seen, while Slack has clearly been killing it. Though there can be too much of a good thing.